We have all heard the statistics about how an increasing number of Americans profess no specific religious affiliation, even if they may still identify as spiritual.

Given this reality, it’s instructive to ponder what it might look like were there to be a day without religion in the United States—if a temporary blip in the universe suddenly resulted in religion somehow not existing for a 24-hour period. Would it even be all that noticeable?

Here are the ways that being suddenly religion-less for a single day would matter in our lives:

Very Young Children Would Be a Lot Less Secure and Cared For:

Somewhere between 15 and 20 percent of babies and toddlers are in childcare or preschool in a church, synagogue or other place of worship. Without religion, those kids would go uncared-for that day. Or mom or dad would have to stay home from work.

We Would Be Less Likely to Take Adequate Care of Ourselves:

Surveys reveal that those who regularly attend religious services are considerably more inclined to get preventive medical care in advance of becoming ill. In other words, those who nurture their spirit tend to do the same with their physical being.

We Would Experience a serious Economic Impact:

Some 19 percent of higher education institutions in the United States bear a religious (Presbyterian, Roman Catholic, Jesuit, Methodist and so on) affiliation—including such schools as Boston College, DePauw University, Southern Methodist University and the University of Notre Dame. Were faith itself to disappear for even a single day, the results could be economically catastrophic. These campuses enroll more than 2 million students, employ upward of 600,000 faculty and staff, and have operating budgets of more than $35 billion. Translated, even 24 hours without religious colleges and universities would have a staggering impact on America’s bottom line. 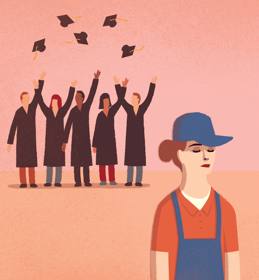 Indeed, We Would Probably Be a Lot Less Well:

We know that the routine of attending services and hanging out with our friends during faith-based activities drives a state of well-being that lowers blood pressure, slows the advance of heart disease, and in general leaves us feeling healthier than if we spent the same time plastered on a couch watching television.

Some 20 percent of hospital beds in America are found at medical facilities with a religious affiliation. That would be an awful lot of people beset by illness lacking any means of finding acute care.

We Would Exercise Considerably Less Compassion:

All of the faith-based charities that raise money for the homeless, for famine relief, for families on the brink, for children at risk, and so many other humanitarian and philanthropic works would grind to a halt for 24 very difficult hours should religion disappear. That would mean no help whatsoever for many people in need and vast holes in the social safety net.

We Would Lack the Comfort Tools to Soothe Those in Spiritual Need:

When approaching those who have endured a traumatic experience or event, no reassuring spiritual counseling could be offered to lend support and solace in a deeper, more divine way. We might instead be limited to tendering the bereft such platitudes as, “Hopefully things will improve for you soon. Good luck. We will wish the best for you” sans any sacred context.

We Would Be a Lot Lonelier and More Melancholy:

Surveys show that spiritually committed people are twice as likely to say they are very happy. Being part of a regular group such as those found at churches and temples leaves human beings happier, social creatures that we are. We crave contact and deep connection. Without religion that one day, we would be more isolated and quite likely would be miserable.

We Would Feel a Lot Worse About Ourselves Personally—and More Anxious, Too:

If surveys have taught us nothing else, they reveal that the sense of belonging to a larger culture itself builds confidence and self-esteem (of 69 studies, 42 found significantly higher levels of self-esteem among individuals who were more religious). Having a religious social affiliation can also soothe feelings of anxiety, as we tend to rely on our faith to more effectively deal with crises and setbacks in our lives.

We Would Find Millions of People Going Hungry:

Some 64 percent of agencies providing food aid to individuals and families are faith-based or housed in a religious organization. Without religion, that sustenance might well not get distributed at all for an entire day.

Community Volunteering Would be Cut in Half:

Faith-based institutions engage 45 million volunteers, nearly half of the total of American volunteers. And 70 percent of volunteers who serve through faith-based organizations continue serving from one year to the next.

We Would Have No clergy to Conduct Services or to Consult on Personal Matters or Issues of Faith:

If there’s no religion, there is no clergy, leaving an enormous faith gap. In practical terms, this would mean that people beset by probing questions are left on their own without uplifting assistance from a person of spiritual authority.

prev
Get Religion?
next
The Relevance of Religion in 2015
©1996-2022 Church of Scientology International. All Rights Reserved. Freedom is a trademark and is used with its owner’s permission.